Smokey-voiced jazz-pop singer Norah Jones brings out a brand new album this year – Pick Me Up Off The Floor – and she'll be performing her brand new material as part of a nationwide tour that comes to BB&T Pavilion on Sunday 2nd August 2020! The nine-time Grammy Award-winner, whose smash-hit debut album Come Away With Me made her a global phenomenon, has recently collaborated on the single “I’ll Be Gone” with legendary gospel singer Mavis Staples, who will be joining her for the tour as a special guest support act! The two singers will also be joined for the evening by another support act – Austin-based psychedelic soul act The Black Pumas! 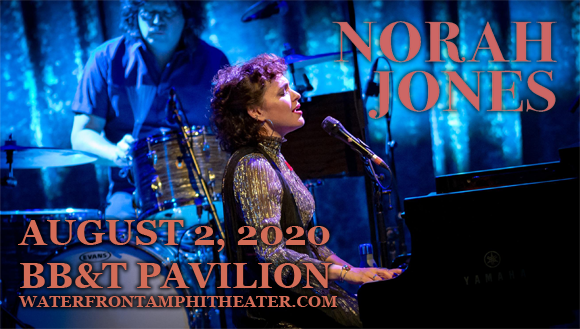 Norah Jones found huge success with her 2002 debut album Come Away With Me, which earned her five Grammy Awards, including the Album of the Year, Record of the Year, and Best New Artist, and was certified diamond by the RIAA. The American singer, songwriter and pianist is the daughter of Indian sitar master and composer Ravi Shankar, and the half-sister of fellow musician Anoushka Shankar. Her blend of jazz, country, pop and folk music began a trend for radio-friendly jazz fusion, and she was named as Billboard's top jazz artist of the 2000s decade. Jones' three subsequent albums – Feels Like Home (2004), Not Too Late (2007) and The Fall (2009) – were all certified platinum in the US. She is due to release her seventh studio album, Pick Me Up Off The Floor, in 2020. Jones has won nine Grammy Awards to date, and has sold over 50 million albums worldwide.