As part of a goliath, co-headlining metal tour that will tear across the US this summer, thrash metal legends Megadeth & and groove metal masters Lamb of God come to BB&T Pavilion on Thursday 18th June 2020! A must for all who like it heavy, this epic team-up will see full sets from both bands, where they will perform a roster of classic hits from their mighty back catalogs and give fands the show of a lifetime! Not only will these two hugely influencial groups be performing, but their support will come from fellow metal favorites Trivium and In Flames! Unmissable! 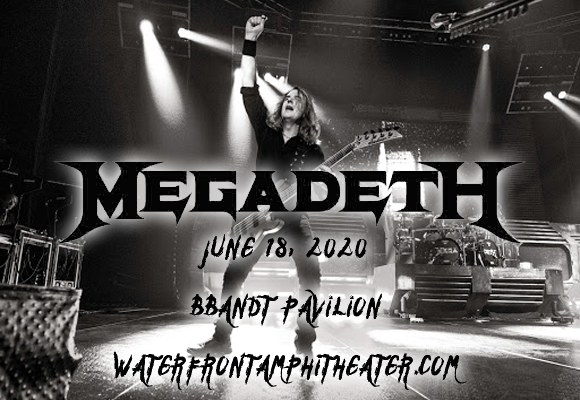 Joining Metallica, Anthrax and Slayer as one of the "big four" of American thrash metal, Megadeth represent the pinnacle of the genre, influencing generations of metal bands to come with their heavy and aggressive take on music and powerful political themes. The group was formed in 1983, not long after guitarist Dave Mustaine left Metallica, in Los Angeles, California, by Mustaine and bassist David Ellefson. The band's independent debut release, Killing Is My Business… and Business Is Good!, led to a major-label deal for the band with Capitol Records. The exposure offered to them by a larger label meant that their second album, Peace Sells… but Who's Buying?, was a huge hit within the metal scene, and was the first of five platinum-selling albums for the band. Their triple-platinum-selling 1992 album, Countdown to Extinction, hit number two on the Billboard 200 (their highest-charting album to date), and launched some of their best-known singles: "Symphony of Destruction", "Sweating Bullets", and "Skin o' My Teeth." To date, Megadeth has sold over 38 million records worldwide. The band has been nominated for twelve Grammy Awards, and won its first in 2017 for Best Metal Performance with the song "Dystopia."