Hit-making heroes Hootie & The Blowfish are back! After several years in hiatus while lead singer and country music star Darius Rucker embarked upon his solo career, the South Carolina roots rockers have reunited, and with a brand new album waiting in the wings! The group, whose music ruled the radio airwaves throughout the 1990s, brings its Group Therapy Tour to BB&T Pavilion on Sunday 28th July 2019, with fellow '90s stars Barenaked Ladies in support! 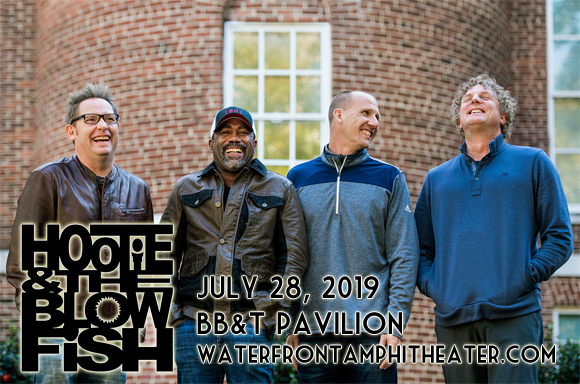 American rock band Hootie and the Blowfish formed in Columbia, South Carolina. Consisting of Darius Rucker ( lead vocals, rhythm guitar), Mark Bryan (lead guitar, backing vocals, piano), Dean Felber (bass guitar, backing vocals, piano) and Jim Sonefeld (drums, percussion, backing vocals, rhythm guitar), the group found fame in the 1990s with the release of their debut album, Cracked Rear View (1994). The album became the best-selling album of 1995 and launched four top 20 singles: "Hold My Hand", "Let Her Cry", "Only Wanna Be with You", and "Time", before eventually becoming the 19th-best-selling album of all time in the United States. The album has been certified 21 times platinum in the United States. After the success of Cracked Rear View, the group won the "Best New Artist" award at the 1996 Grammy Awards ceremony. Before embarking upon a hiatus in 2008, the group had charted sixteen singles on various Billboard singles charts and released five studio albums. Hootie and the Blowfish reunited in 2018, and will release their eagerly anticipated sixth studio album in 2019.