The Lumineers are back with their third studio album (aptly titled III), and they're heading to BB&T Pavilion on Friday 5th June 2020 to bring their brand new material to the stage! The Denver-based folk-rock band will be performing tracks like recent singles “Leader of the Landslide,” “It Wasn’t Easy to Be Happy for You,” “Gloria,” “Life in the City” and “Donna,” as well as classic hits like "Ho Hey"! 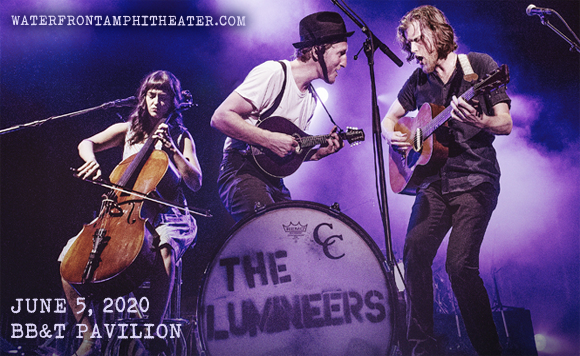 Denver-based American folk rock band The Lumineers was formed in 2005 by founding members Wesley Schultz (lead vocals, guitar) and Jeremiah Fraites (drums, percussion). Cellist and vocalist Neyla Pekarek was also a member of the band from 2010 – 2018. The band's eponymous 2012 debut album peaked at number two on the Billboard 200 and has been certified triple platinum in the US and Canada with platinum certifications in the UK and Ireland, and gold in Australia. They enjoyed similar success with their follow-up, Cleopatra (2016), which debuted at number one in the U.S., U.K. and Canada, and is certified platinum in the US. Over the years, the band has charted several international hit singles including "Ho Hey", "Stubborn Love", "Ophelia" and "Cleopatra", and has become one of the top touring bands in the United States.