Get ready to rock!!! Supergroup Sammy Hagar and the Circle have teamed up with Whitesnake for a scorching co-headliner tour that comes to BB&T Pavilion on Wednesday 22nd July 2020! It's gonna be a wild ride as these veteran performers blast out the classic hits and strive to out-do each other:

“I love some friendly competition onstage and that’s exactly what this is going to be,” Hagar said in a statement. “David [Coverdale] and I have nothing but the highest respect for one another, but we would also like to blow the other guy off the stage! Add in Night Ranger and the fans will have one hell of a night of music.” 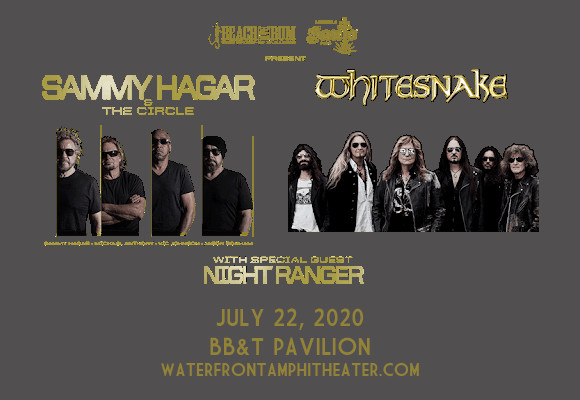 Sammy Hagar and the Circle is a supergroup formed of Sammy Hagar (lead vocals, guitars), Michael Anthony (bass guitar, vocals), John Bonham (drums, percussion, vocals) and Vic Johnson (lead guitar). Hagar, also known as the Red Rocker, originally began his career in the 1970s with the hard rock band Montrose, before embarking upon a solo career. Then, in 1985, he replaced Dave Lee Roth as the lead singer of Van Halen, who he sang with until 1996. It was during his time in Van Halen that he met Michael Anthony, who played bass with the band from 1984 – 2006. Bonham is the son of the late Led Zeppelin drummer John Bonham, and the force behind Jason Bonham's Led Zeppelin Evening. Johnson is known for playing guitar with The BusBoys, and was part of the band Sammy Hagar & The Waboritas from 1996–2005. In 2014, Hagar brought the band together, forming a supergroup to play solo hits from his back catalog, als well as songs from Montrose, Van Halen, and Chickenfoot, in addition to Led Zeppelin tracks in honor of Bonham's father. The band released its debut studio album Space Between in May 2019, debuting at number four on the Billboard 200, and number one on Billboard's Top Album Sales, Independent Albums and Top Rock Albums charts.