EVENT POSTPONED (date TBA). Hold on to your tickets! They will be valid for the new date once announced.

For the first time in a decade, the world-famous country duo Brooks and Dunn are headed to BB&T Pavilion on Friday 26th June 2020, bringing to the stage a set of their iconic, singalong songs from a career of chart-topping hits! The Grammy Award-winning twosome retired from music in 2009, but returned to the stage in 2015 for a five year Las Vegas residency with Reba McEntire. Now, they're out on the road and ready to entertain the masses!

“So much for 'we quit,' huh?” Ronnie Dunn said in a statement. "That horse that we were afraid of riding into the ground apparently didn't share our sentiment…he gotta fire in his belly raring to go another round or two. I like the ring of it…'Brooks & Dunn ride again!' ” 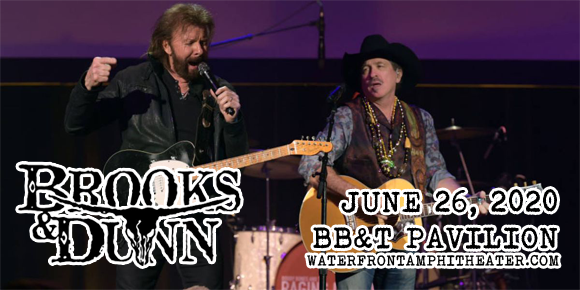 Kix Brooks and Ronnie Dunn form the country music duo Brooks & Dunn. Both vocalists and songwriters, the two got together in 1990 under the advisement of fellow songwriter and Nashville-based music executive Tim DuBois, who knew them both as solo artists. In 1991, the duo signed to Arista Nashville, releasing their debut single, "Brand New Man", in June of that year, reching number one on the Hot Country Songs chart. A prolific act, they have released 50 singles over the years, 20 of which have been Hot Country Songs number ones, with an additional 19 hitting the top 10. "My Maria" (a cover of the B.W. Stevenson song) and "Ain't Nothing 'bout You", two of the duo's number one singles, were the top country songs of 1996 and 2001 respectively. All but two of Brooks & Dunn's studio albums are certified platinum or higher by the Recording Industry Association of America. The duo announced their retirement in 2009, but reunited in 2015 for a stint in Las Vegas with fellow country artist Reba McEntire. They have twice won the Grammy Award for Best Country Performance by a Duo or Group with Vocal, and were inducted into the Country Music Hall of Fame in 2019.