This summer you can catch the unbelievable talent that is Chris Stapleton as he continues to impress on his 2021 All American Roadshow tour dates! With his incredible and flawless songwriting talent, Chris Stapleton has had a successful career and is still inspiring fans across the world! Come and catch his biggest hits to date as he performs live at BB&T Pavilion on Friday 1st October 2021 (Rescheduled from Saturday 10th July 2021)! Tickets are available now to purchase! 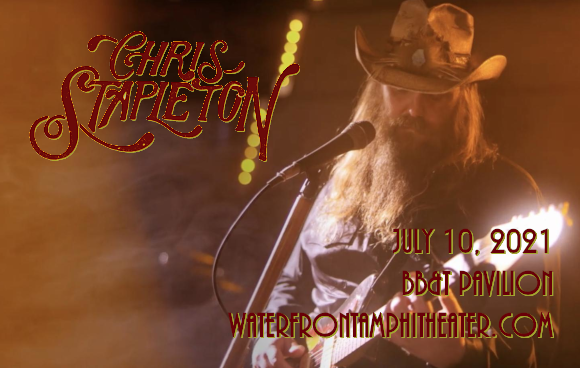 As Chris Stapleton decided quite quickly that he was destined for a career in music, he made a move to the heart of country, Nashville Tennessee in the early 2000s and followed his dream to make and produce songs. With his underlining talents he became a hard working musician and progressed to songwriting, both for himself as a solo artist and for fellow worldwide names such as the country superstar Kenny Chesney – together they created the five-week number-one "Never Wanted Nothing More." This sparked a long run of plenty more collaborations from Josh Turner's "Your Man', George Strait's "Love's Gonna Make It Alright", and Luke Bryan's "Drink a Beer". As well as working along side Adele, Brad Paisley, Vince Gill, Peter Frampton, Sheryl Crow and Ed Sheeran.

With all of his amazing music releases, Chris Stapleton has become one of the most exciting artists on the scene and has been highly recognised by music reviews and critics alike, with his sheer talent and impeccable triumphs, this led Chris Stapleton to receive an incredible five Grammy Awards, seven Academy of Country Music (ACM) Awards, and ten Country Music Association (CMA) Awards for his releases.

As he storms the world with his sensational sounds and gracing some of the biggest stages, Chris Stapleton is treating his North American fans to an unforgettable experience this coming summer. As his previous All American Roadshow dates have been so successful, Chris Stapleton will be extending his tour for a once in a lifetime performance! Join him at BB&T Pavilion this July – tickets are NOW on sale – don't miss out!