Zac Brown Band comes to BB&T Pavilion on Friday 19th June 2020 to promote their latest album, The Owl! The multi-platinum-selling, Grammy Award-winning country rock band always draws a huge an enthusiastic crowd for its shows, and has an incredible repertoire of songs to get fans going! With a line-up of exceptionally talented musicians and an array of songs from a wide variety of genres, Zac Brown Band keeps it fresh with every show and earns its reputation as one of the hottest bands on the live circuit!

“The energy throughout ‘The Owl Tour’ has been electric at every stop,” said Zac Brown. “It’s been an unforgettable year and we’ve had so much fun sharing the new music with our fans. We can’t wait to get back on the road next spring.” 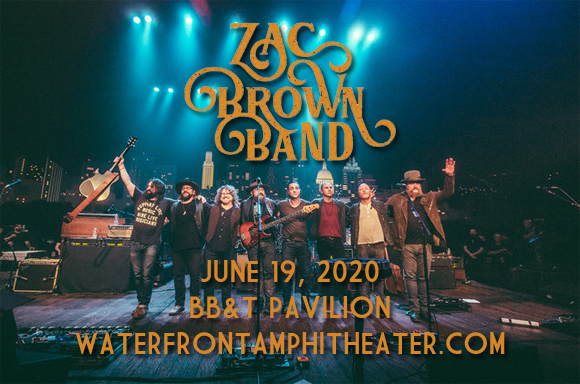 Whilst a thread of sunny, surf-influenced Southern rock runs throughout Zac Brown Band's music, part of what makes the Georgia band so successful is its ability to make quality music that defies genre. The band's namesake, frontman and principle songwriter Zac Brown has collaborated with a wide variety of artists over the years, including Avicii, Chris Cornell, Jimmy Buffett, Foo Fighters, Sheryl Crow, Sara Bareilles, and Jason Mraz, among others. Brown began the band as a solo act in the early 2000s, and slowly collected a group of like-minded musicians along his way, until they became the multi-platinum, Grammy Award-winning group they are today. The band first found success in 2008 with the lead song off five-times platinum-selling album The Foundation, “Chicken Fried,” which was also certified five-times platinum. To date, the band has charted 16 singles on the Billboard Hot Country Songs or Country Airplay chart, 13 of which are number ones. The Owl, Zac Brown Band's most recent album, was released in 2019 and reached number two on both the Billboard 200 and the UK Country Albums charts, and number one on the US Top Country Albums and Independent Albums charts.