As one of the biggest stars right now on the country music scene – Thomas Rhett is bringing his incredible brand new album to the stages across North America, giving his ever loving fan base a sneak preview and another chance to catch him live in concert! This amazing and exciting tour has everybody talking as it will also feature a support performance from none other than Cole Swindell! Get ready by booking your tickets and heading down for the main event at BB&T Pavilion on Friday 27th August 2021! 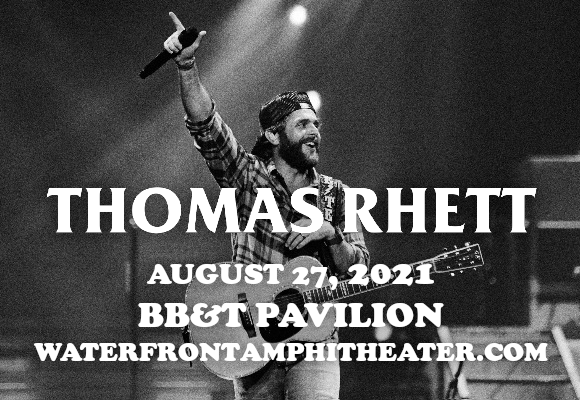 With his incredible collection of records, Thomas Rhett has truly captivated the world with his sensational talents in songwriting. As he has provided his fan base with a long list of albums from It Goes Like This (2013), Tangled Up (2015), Life Changes (2017). and Center Point Road (2019) – he has worked his way up to the top of the charts and remained to be one of the biggest names around. From his wide collection of album releases, he has dropped countless of number one singles from each masterpiece, including the likes of; "It Goes Like This", "Get Me Some of That", "Make Me Wanna", "Crash and Burn", "Die a Happy Man", "T-Shirt", "Star of the Show", "Craving You", "Unforgettable", "Marry Me", "Life Changes", "Sixteen", “Remember You Young” and "Look What God Gave Her" – the list is pretty much endless and all of these songs are still some of his fans favorites today.

Cole Swindell is also up there as one of the biggest superstars right now in the country genre, with his transformational career that has progressed so quickly from the underground and local scene to the mainstream. With a massive following across the nation and globally, this talented artist has had countless radio plays throughout his journey in music. As he first started with supporting several of the greatest Country names to walk the earth, he has also been embarking on his headline tours – but he will be returning to the stage along side Thomas Rhett in the summer of 2020 for a special showcase and to help celebrate the release of Thomas Rhett's new record!

Both of these international names will be heading down to BB&T Pavilion in August 2020 – don't miss out on the incredible opportunity to be there! Tickets available to book right here, right now!