Two legendary bands in Rock, Funk and Soul – Santana & Earth, Wind and Fire will be bringing their much loved greatest hits to North America this Summer! Celebrate your love for their music by booking your tickets as they head to BB&T Pavilion on Thursday 20th August 2020! Join Santana for "Black Magic Woman" and more and Earth, Wind & Fire for their countless hit songs! It's going to be a night to remember… 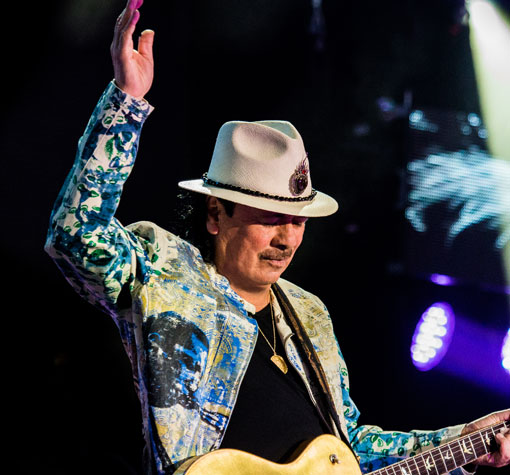 Led by the legendary Carlos Santana, the rock group Santana have truly made their mark in music history as one of the most famous Mexican-American bands to walk the earth. With their incredible long lasting singles, they have kept on giving throughout their entire career spanning throughout the 1960's, 1970s and right through to the 2000s.

Santana have proven their abilities through their powerful music full of experimental moments, capturing the hearts of music lovers all around the world during their unforgettable performances. The band have played a steady and critical part in some of the most influential eras of music, including their iconic appearance at the original Woodstock festival in 1969.

Since Santana wowed the initial crowds, they have continued their international success with chart topping album releases throughout the decades. Their biggest releases include; Caravanserai (1972), Welcome (1973), and Borboletta (1974) and Supernatural (1999) which of course spawned the number one singles "Smooth" and "Maria Maria" and still remain to be some of their greatest to date.

As one of the most successful groups of all time, Santana have given us an impressive twenty five records and sold over forty three million worldwide! Their legacy continues and Santana are still celebrating their vast collection of music with their world concerts…

2020 brings Santana back to the US for another unstoppable experience – join them and grab the chance to catch all of your favorite Santana hits LIVE on stage as they hit the road this coming summer season! It's time to prepare yourself for one of the greatest bands around!