Sam Hunt comes to BB&T Pavilion on Friday 17th July 2020 on his Southside Tour! The country singer, whose R&B and pop-tinged music made him a huge star when he burst on the scene with 2014's Montavello, has announced Southside – a long-awaited follow-up to the album, including the singles "Body Like a Back Road," "Downtown's Dead," and "Kinfolks!" This is huge for fans of the performer, who have been waiting a long ol' time for something as big as this!

"We'll be playing more shows than I have in several years," he shared at the time. "We'll be hitting it hard. I've devoted all of next year to touring. I told my manager the more, the better."

Hunt will be joined by Kip Moore and Travis Denning in support! 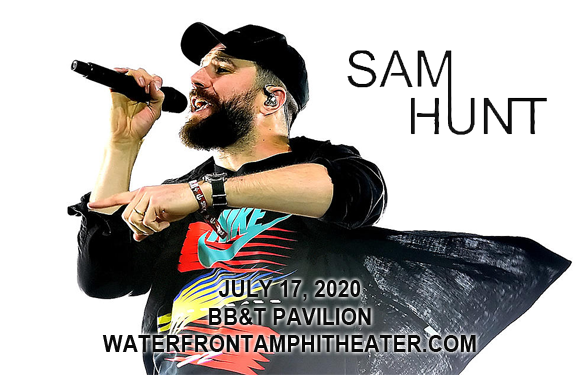 A man of many talents, country music star Sam Hunt's future was nearly very different – his path as a professional football player seemed certain, but in 2008, two months after an unsuccessful tryout with the Kansas City Chiefs, he unexpectedly moved to Nashville to pursue a career in music. After securing a publishing deal as a songwriter, Hunt began writing for other artists and in 2012 he struck gold when he co-wrote Kenny Chesney's 2012 number one hit "Come Over", winning an ASCAP award. He went on to write for Keith Urban, Billy Currington, and Reba McEntire, among others. In 2014, he signed with MCA Nashville, and his debut album, Montevallo, was released that year. It broke several chart records, launching five singles, including three consecutive Hot Country Songs chart and four Country Airplay chart number ones. Hunt's second studio album, Southside, is released in 2020 and was preceeded by three singles – "Body Like a Back Road," "Downtown's Dead," and "Kinfolks." "Body Like a Back Road," which was the lead single for the album, was released in 2017 and is his highest-charting hit, reaching number 6 on the Billboard 200.