Get ready for the star-studded hip-hop tour of the year!! Meek Mill and Future are joining forces for a HUGE headlining tour, headed to the BB&T Pavilion on Friday 13th September 2019!! They’ll be joined on the road by special support from YG, Mustard and Megan Thee Stallion!! It’s going to be INTENSE – tickets are expected to fly for this so don’t delay!! Grab yours while you have the chance!! 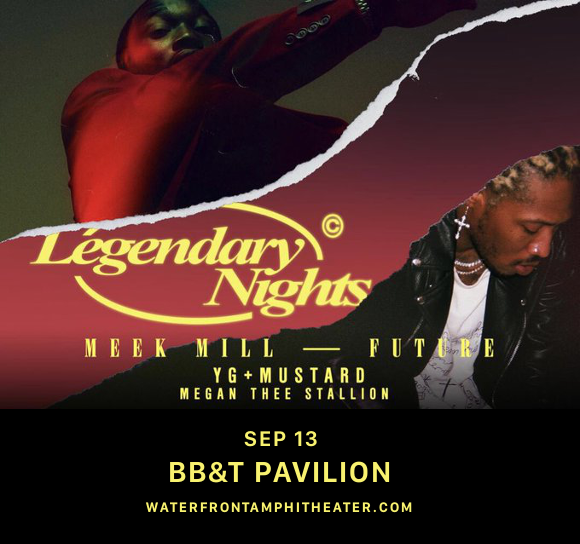 Meek Mill is touring in support of his latest and fourth album, “Championships,” of 2018, while Future is promoting “The Wizrd” which he dropped earlier this year. The release of “Championships,” followed Meek Mills’ prison sentence, one of several, and his album, focuses on the injustices of the US prison system, and led him to form the REFORM Alliance with Jay-Z, aiming to alter it by lobbying for reforms in policies and laws. The album is, unsurprisingly, politically charged, and the intensity behind it helped it gain a huge positive reception from music critics.

"Meek raps with the same fervor he's always had, but there's a discernable focus on Championships,” wrote Billboard. “He’s bridled his high-octane flow and is more clear-eyed. Incarceration has sparked a new purpose in him, as an activist and also as a man coming into his own.”

Get ready to see this incredible force of the modern rap era perform before your very eyes – get your hands on tickets to see Meek Mills and Future live in concert NOW while they last!!