Multi-platinum-selling chart toppers and three-time Grammy Award-winners Maroon 5 embark on a massive tour this year that comes to BB&T Pavilion on Thursday 3rd September 2020! Former "The Voice" judge Adam Levine and his band of pop-rockers will be performing all the hits, as well as songs from their hotly-anticipated new album! The band will also be joined by pop singer-songwriter Meghan Trainor and retro soul singer-songwriter Leon Bridges in support! 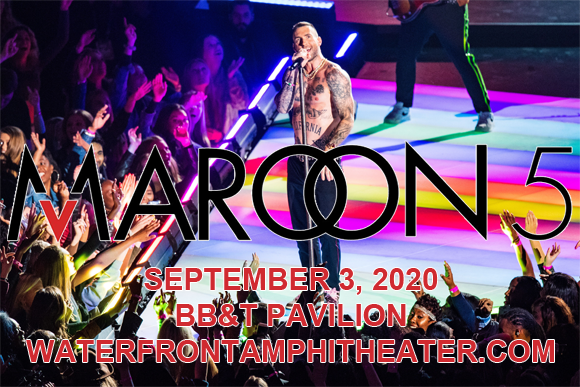 Originally forming in 1994 in Los Angeles, California as high school band Kara's Flowers, American pop rock band Maroon 5 is now one of the world's best-selling bands, having sold over than 120 million records worldwide. As Kara's Flowers, the band released its independent debut album We Like Digging?, which led to a deal with Reprise Records, with whom they released the album The Fourth World in 1997. After parting ways with Reprise, the band renamed themselves Maroon 5 and launched their debut album Songs About Jane in June 2002. A sleeper hit that reached the top ten of the US Billboard 200 chart, it launched five hit singles, including "Harder to Breathe", "This Love" and "She Will Be Loved", and was eventually certified quadruple-platinum. To date, Maroon 5 has launched six studio albums, and all of them have been certified platinum or multi-platinum by the RIAA, with three of them reaching number two on the Billboard 200 and two of them hitting the top spot.