One of America's hottest and most fierce rappers, Machine Gun Kelly, is back, hitting the road on the Mainstream Sellout Tour in support of his newest record of the same name. The tour is making a stop at Waterfront Music Pavilion on Sunday, June 26, 2022. Catch fresh full-blown pop-punk tracks from MGK's new album performed live on stage as the crowd goes wild to the hot rapper's raging voice in new anthems including "Maybe", "Emo Girl", "Ay!", and "Papercuts". The 'wild boy is known for his rash bars and catchy beats with his biggest hits including "Bad Things", "Home", "My Ex's Best Friend", and "Wild Boy". It's time to rock on and get those tickets before they 'sellout! 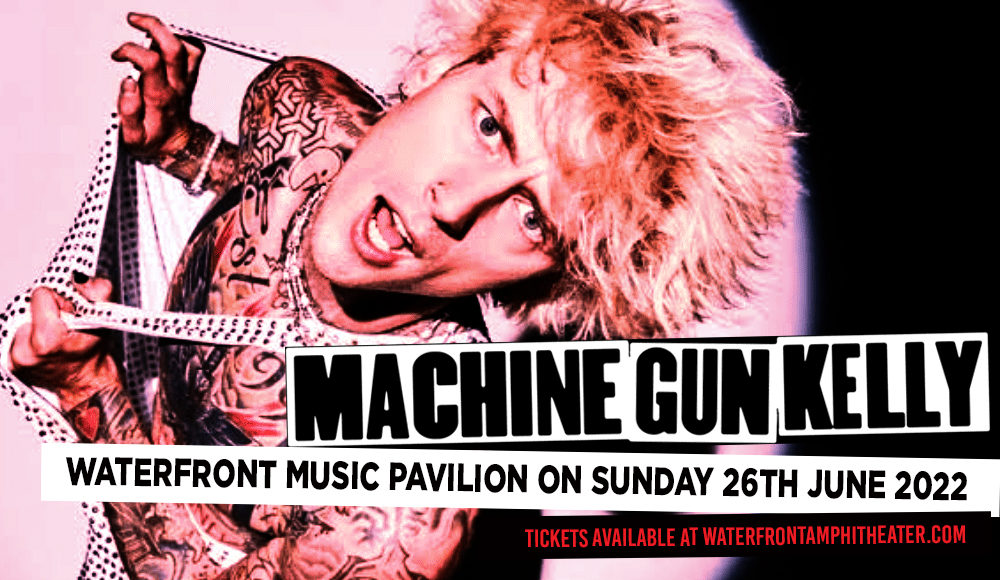 Colson Baker, or Machine Gun Kelly as we all know him, was born to missionary parents in Houston, then moved around the world. After family troubles and bullying through childhood, Baker discovered rap in 6th grade. Later on, he started recording music in his home studio – calling it a "Rage Cage". In 2009, he won amateur night at Harlem's Apollo Theater, the first rapper to do so.

Early on in his career, he dropped several mixtapes including Rage Pack, Lace Up, and 100 Words and Running. In 2011, he caught the attention of Sean Combs, who offered a recording contract with Bad Boy Records, after performing at his first SXSW show. That moment paved the way for the 'wild boy to make raging waves across the globe.

He released "Wild Boy" as his lead single from his debut album "Lace Up". "Wild Boy" made it to the Hot 100 and is now awarded 2x Platinum by the RIAA. MTV hailed him as Hottest Breakthrough MC of 2011 by MTV. His debut record featured guest appearances from Lil Jon, Waka Flocka Flame, Bun B, and much more.

From then on, Machine Gun Kelly continued to emerge as one of America's hottest rappers in the industry. His succeeding records, "General Admission", "Bloom", "Hotel Diablo", and "Tickets to My Downfall", all produced hits after hit through the years. He's also featured on various tracks by various artists including DMX, Little Mix, Iann Dior, Kid Ink, Blackbear, and Avril Lavigne.

MGK's hit singles over the last decade include "Till I Die", "Home", "I Think I'm Okay", "My Ex's Best Friend", "At My Best", and the RIAA 5x Platinum single featuring Camila Cabello, "Bad Things".

After 2020's #1 record "Tickets to My Downfall", Machine Gun Kelly is set to bring the fire back and rage on after dropping his sixth studio album "Mainstream Sellout", a pop-punk record that serves as an escape from life's hurdles through rocking it out in his tracks.

Fresh new music and his biggest hits live on stage. Book those tickets now, before they 'sellout!