The brand new Lady Antebellum tour kicks off this spring, and is making its way to BB&T Pavilion on Friday 4th September 2020! The seven-time Grammy Award-winning trio have named the stint after their most recent album, Ocean, and it marks their first time on the road since they began their Our Kind of Vegas residency in Las Vegas last year. They'll be joined by an awesome support line-up of Jake Owen and Maddie & Tae!

“After our Vegas residency and working on this record for the past year we are itching to get back out on the road and see how the fans gravitate to some of the deeper cuts off of Ocean,” Charles Kelley said. “We’ve missed those huge crowd sing-alongs and we are looking forward to having Jake Owen and Maddie & Tae light up the stage every night. May can’t come fast enough.” 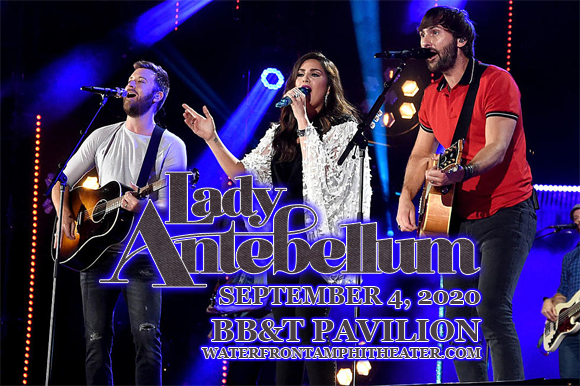 It didn't take long for the country music scene to get wind of country music trio Lady Antebellum's talent – within a year of forming, they were on Jim Brickman’s 2007 single, “Never Alone,” which reached number 14 on Billboard’s Adult Contemporary chart. After that, they were signed to Capitol Nashville, and the group's popularity only increased with their 2008 self-titled debut album, which reached number four on the Billboard Hot 100 and debuted at number one on the Billboard Top Country Albums chart, which was a first in the history of the chart. 2008 also saw them awarded Top New Duo or Group by the Academy of Country Music and New Artist of the Year by the Country Music Association. Over the years, the band star has continued to rise – they have won seven Grammy Awards (including five won at the 2011 Grammy Awards ceremony), six CMA Awards, five CMT Awards, four AMA Awards, nine American Country Awards and eight ACM Awards to date, among others. They have also sold more than 12.5 million digital singles and 10 million albums in the United States, and have produced sixteen singles on the Hot Country Songs and Country Airplay charts, including nine number ones. Their latest album is 2019's Ocean.