Kings of Leon fans – we waited five long years for a new album, but the wait is over – When You See Yourself is now a reality! Released in March 2021, the album got controversial reviews at first, which only indicates its musical complexity. And just like Sex is on Fire, and Use Somebody, every song in this album will become a late-night-car-ride favorite, a part of the life soundtrack of every alternative rock fan. According to the Rolling Stone, the lead single, “Bandit,” "lunges and soars with rippling guitar leads cascading across some of the dirtiest riffs the band has put on a record since the New South-meets-neo-Strokes garage moves of its first two albums." That's what we call a compelling review. 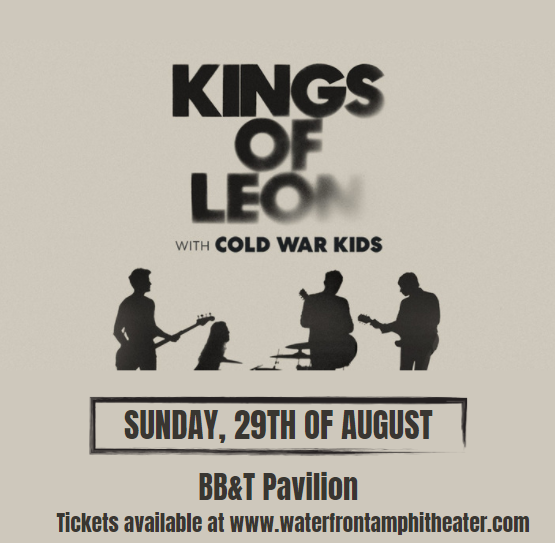 And now, a year after life was put on pause, we invite you to celebrate the return of live events together by celebrating the making of yet another iconic alternative rock album's history. Join us at BB&T Pavilion on Sunday 29th August 2021, get your tickets by following the link below.

BB&T Pavilion is Camden's favorite venue for memorable summer events! Right across the river from Philly, the amphitheater offers a beautiful view of the city lights, perfect for a cold beer on the fresh grass on a warm summer night under the beats of your favorite songs. The nearly 30,000 capacity venue features a lawn with video screens, computerized sound enhancement, and a clear view of the Philadelphia skyline, Delaware River, and the Benjamin Franklin Bridge to the northwest.

Just picture yourself with a drink in hand, overlooking the magnificent Philly skyline surrounded by thousands of flickering lights bobbing left to right along the beats of "Walls" while Caleb's voice soars through the night sky. Those are the summer memories we live for. Grab your ticket now and end the summer on a high note!