Take a step, breathe, and hold your horses with everything going on right now. Close your eyes and imagine a crowd singing along to your favorite country-pop hits as Keith Urban strums his guitar and gazes as you scream at the top of your lungs for an encore! Well, you're in luck as the country superstar himself, Keith Urban, is embarking on "The Speed of Now World Tour", stopping by at the BB&T Pavilion on Sunday, 31st July 2022. The singer known for his magnetic charm and chart-topping country hits such as "You'll Think of Me", "Kiss a Girl", "Blue Ain't Your Color", "Days Go By", and a whole lot more, personally asked unsuspecting fans what they'd like to be on the setlist on Instagram recently with a video of him calling fans and a caption saying "There’s no one better out there to help than all of YOU ! drop a song (or ten) that you want to hear in the comments". Keith is surely excited to meet the crowd and have them sing along to the songs you requested! So, better hurry up and book your tickets now! 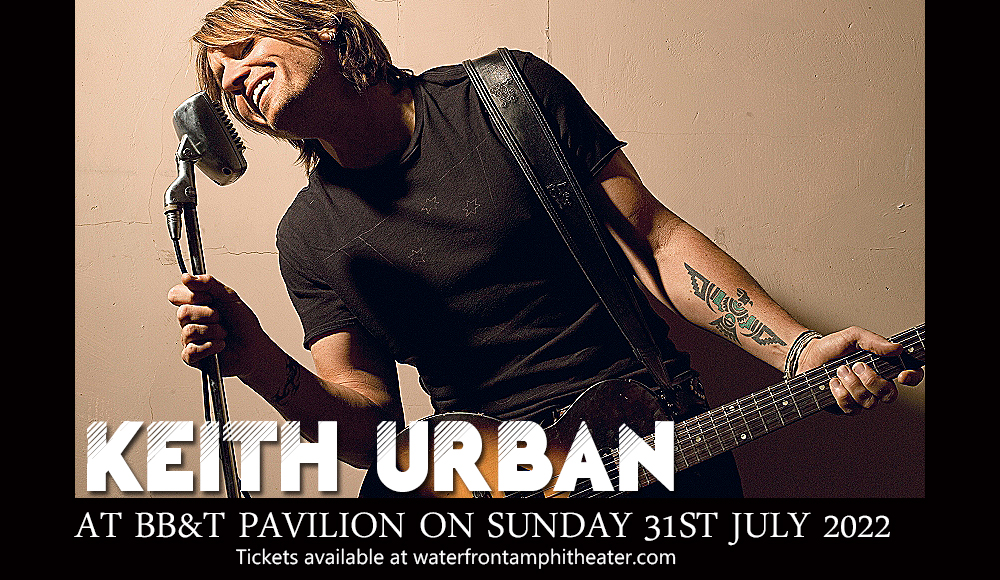 Keith Urban started making appearances as a contestant on a TV show in 1983, then propelling to greater heights as he released his debut album in 1991 which allowed him to make waves in Australia. Years later he skyrocketed to worldwide fame for his hit singles across 12 studio albums – with 22 #1 singles on Billboard Charts!

He also made appearances as a coach on The Voice Australia, and as a judge on American Idol. In 2020 he featured in an Australian documentary film, "Slim and I".

The renowned country singer dropped his latest studio record "The Speed of Now Part 1" back in 2020 that featured the hit single "One Too May" with Pink and Country Airplay top 10 hits "God Whispered Your Name" and "We Were". Through decades, Urban never failed to deliver catchy hooks, powerful lyrics, and serve them alongside his magnetic charm that makes fans go wild over the acclaimed country-pop hitmaker.

“It’s what I’ve always done and it’s what my music needs to live and breathe" Keith says as he talks about being a live performer and kickstarting his "The Speed of Now World Tour".

"Our shows are all about living in the moment. They’re a totally interactive and immersive experience where everyone can participate in whatever way they want – sing, dance, do whatever.” he adds.

He'll surely sing your favorite tracks such as "Where the Blacktop Ends", "John Cougar, John Deere, John 3:16", "The Fighter" ft. Carrie Underwood, ""You're My Better Half", "You'll Think of Me", and much much more!

You'll definitely be thinking of the star himself, Keith Urban, as he rises up the stage and performs crowd-favorite requested songs. It's time to live the moment as the tour begins. So, book your tickets now!