AMC's "Artist of the Decade" Jason Aldean comes to BB&T Pavilion on Friday 14th August 2020 on his We Back Tour! Taking its name from the first single from his 9 album, the tour sees Aldean doing what he does best – bringing the party and putting on a high-octane, larger-than-life show for his Aldean Army! No doubt he'll be performing tracks from the album, as well as a few of his other hits, and he'll be joined by an unbelieveable support line-up of country acts in support: Brett Young, Mitchell Tenpenny & Dee Jay Silver! 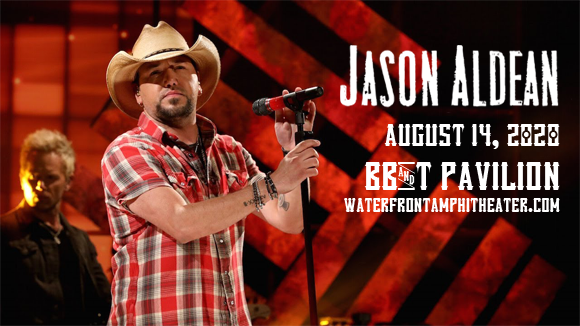 Country star Jason Aldean decided to pursue a career in music from a young age, forgoing a college baseball scholarship in favor of playing nightclubs and bars, managed by his father. In 1998, after years working the scene, he was approached by Warner-Chappell publishing, who signed him and moved him out to Nashville. However, his success was short-lived and he was soon dropped from the label, and over the next few years had a series of failed showcases and postponed sessions. After giving himself a six-month limit before turning tail to Georgia, Aldean was signed to Broke Bow Records within five weeks. Releasing his self-titled debut album in 2005, the rest was history – the platinum-selling album was a critical and commercial hit, launching three top ten singles including Aldean's first number one, “Why”. Now, he's a top-selling artist with 21 number one singles, a further nine top 10 hits, and seven albums that have been rated platinum or higher by the RIAA.