The archetypal singer-songwriter that changed the landscape of music forever, folk rock icon James Taylor comes to BB&T Pavilion on Friday 10th July 2020 for an intimate night of music! This year, Taylor releases his first new album since 2015's chart-topping Before This World, and his new album, American Standard, revisits classic songs with a unique twist. Not only will he be performing a headline set of new songs, but the five-time Grammy Award-winner will be joined by a very special guest – fellow troubadour Jackson Browne! 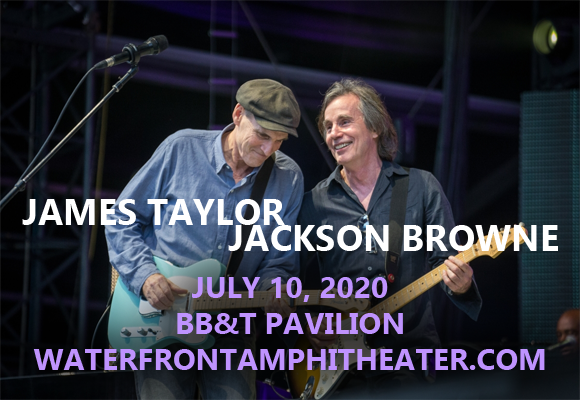 James Taylor is one of the best-selling music artists of all time, having sold more than 100 million records worldwide, and was one of the leading voices of the autobiographic folk rock that changed the face of music throughout the 1970s. Taylor began his career signed to the Beatles' newly formed label Apple Records in 1968, having spent the early-1960s writing and performing, but also struggling with drug addiction. He was in a particularly turbulent period of life when he signed to the label, and although his self-titled debut album was released in late 1968 in the UK and early 1969 in the US, he was unable to promote the album due to hospitalization. However, once he was discharged, things changed for Taylor, who began working on the 1970 album Sweet Baby James alongside his then partner, Carole King. With the help of the candid, confessional single "Fire and Rain," the album was a huge hit and considered a folk rock masterpiece. The following year, he had his first number one hit with a cover of King's "You've Got a Friend," which also won Taylor his first Grammy Award for Best Pop Vocal Performance, Male, in 1972, and won King Song of the Year at the same ceremony. To date, Taylor had 40 albums that have earned gold, platinum, and multi-platinum status, has won five Grammy Awards, and has been inducted into both the Rock and Roll Hall of Fame and the Songwriters Hall of Fame. In 2015, Taylor released Before This World, which became his first US number-one album on the Billboard 200, and is his most recent release.