Five Finger Death Punch are back on tour, promoting the release of their mighty new album, F8! Their epic North American stint will see them slamming out tracks from the LP in a goliath headline set, and they'll also be joined by an insane support line-up of nu-metal rockers Papa Roach, and metalcore legends I Prevail & Ice Nine Kills! This stacked show comes to BB&T Pavilion on Friday 15th May 2020 – be warned, tickets are going to go fast! 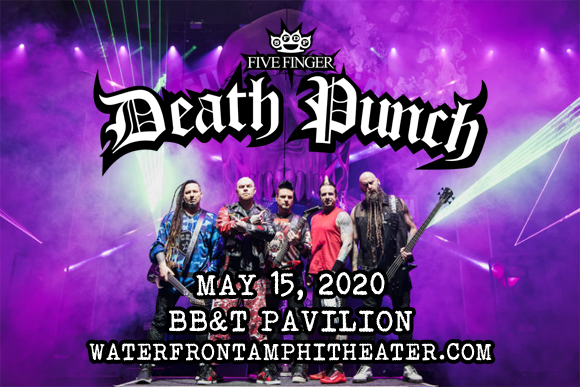 American heavy metal band Five Finger Death Punch found near-instant success with the release of their 2007 debut album The Way of the Fist, which hit number one of the Billboard Heatseekers Chart. The band formed in 2005, in Las Vagas, Nevada, and currently consists of founding members Ivan Moody (vocals) and Zoltan Bathory (guitar), as well as Jason Hook (guitar), Chris Kaell (bass) and Charlie Engen (drums). Since their debut, the band has released three platinum-selling albums – War Is the Answer (2009), American Capitalist (2011) and The Wrong Side of Heaven and the Righteous Side of Hell, Volume 1 (2013) – and three that have been certified gold. Their eighth studio album, F8, will be released in 2020.