Double trouble comes to BB&T Pavilion on Saturday 8th June 2019 as Coheed and Cambria & Mastodon come to tear up the stage on their co-headlining Unheavenly Skye Tour! Coheed and Cambria will be performing in support of their latest album, The Unheavenly Creatures, and Mastodon will be performing their 2009 album Crack the Skye in its entirety! Plus, there's support from Every Time I Die! 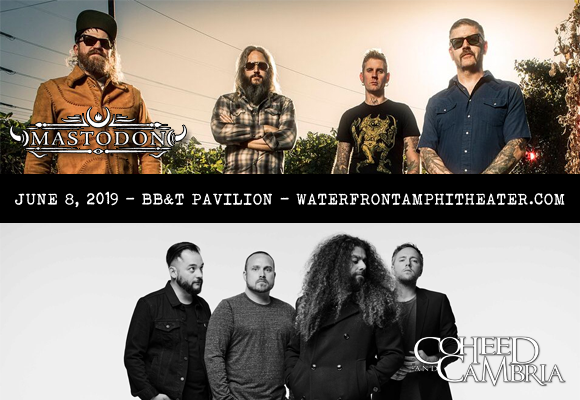 American progressive rock band Coheed and Cambria formed in Nyack, New York in 1995. The band is known for their concept albums, which are based on a science fiction storyline called The Amory Wars written by lead singer Claudio Sanchez (the story has also been transcribed into a series of comic books as well as a full-length novel). To date, the band has released nine studio albums, and The Color Before the Sun (2015), The Afterman: Descension (2013), Year of the Black Rainbow (2010) and Good Apollo, I'm Burning Star IV, Volume One: From Fear Through The Eyes of Madness (20015) all reached the top 10 on the Billboard 200. Their most recent album is 2018's Vaxis – Act I: The Unheavenly Creatures.