Get ready for the tour that no-one expected this year. You heard right – Blink 182 and Lil Wayne are teaming up for a huge North American tour in 2019 with special guest Neck Deep!! They’re headed to the BB&T Pavilion on Wednesday 18th September 2019 – don’t miss them!! Tickets on sale now – grab ‘em while they last!! 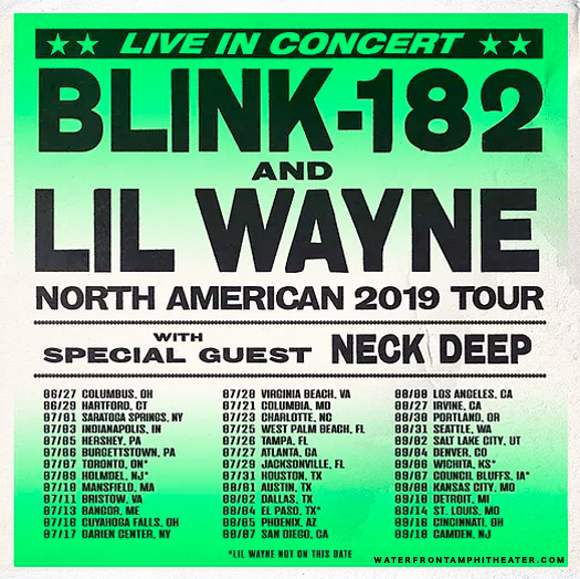 Lil Wayne is touring with his latest album “Tha Carter V,” dropped last year and hit number 1 immediately on the Billboard 200. The album, said by the rapper to be his last, is Lil Wayne’s most mature record yet, one that really showcases his evolution as an artist. “Tha Carter V is about growth, flat-out,” was what the rapper had to say about the record when it dropped. “My thoughts are wiser. I still say what I want to say—it just sounds better and makes more sense. That all comes with growth and maturity. I never try to send messages through music. Music is about self. It's supposed to be personal, a reflection of me, unless you have somebody writing it for you, and everybody know I'm not that artist. I'm not sending a message because that message may not get across. Whatever message you take from it is your choice.” As for Blink-182, the emo-punk outfit have delighted fans by teasing their upcoming album with the all-new single; “Blame It On My Youth”.

The unusual pairing also announced the tour with a mash-up of their big hits “What’s My Age Again?” and “A Milli.” Listen below – but don’t wait about too long, tickets for this once-in-a-lifetime show won’t last long!!